In this project, the National Library of Finland will create support services for the Northern Sámi language in three digital systems maintained by the National Library and used by many other institutions: Finna, Finto and Kotoistus. This will improve the visibility and findability of Sámi information and cultural heritage materials.

During the project, support for Northern Sámi will be added to three National Library services. The goal is to promote the language rights and equality of the Sámi in Finnish society by expanding support for the Sámi languages in digital services that foster culture, scholarship and learning. The project seeks to create an operating model through which language support for national knowledge infrastructures can be developed in reciprocal cooperation with representatives of the language community. This includes consideration for language planning and guidance as well as standardisation of the Northern Sámi language. The cooperation network comprises expert organisations in Sámi cultures and languages.
During the project period, support for Northern Sámi will be built into three interconnected services.

The support efforts will begin with Northern Sámi, which is the most common Sámi language in Finland. This will generate a documented and tested model for providing multilingual services in national-level information systems. The best practices created in the project will be actively shared to maximise the impact of the work. The exact implementation method and order will be planned together with the partner network.

Although more attention has been paid to the position of indigenous languages in recent times, the chance to use them equally alongside the major national languages is rare. This is partly due to a lack of infrastructures. Significant work is being done on the language planning and terminology development of the Sámi languages. Connecting the results of this work to the systems of the National Library will incorporate them into the ontologies used by many authorities and service providers. This will make it possible, for example, to use resources in the Sámi languages in the creation of metadata, which currently must still often be done in a dominant language. Thanks to this project, a person looking for books, audio recordings or administrative resources in Northern Sámi will be able to find results based on content, just like in any other supported language. The project is a significant step in promoting language equality on the level of national information systems.

Indirectly these efforts may have wide-reaching impacts in the experiences and opportunities of Sámi-speaking individuals in Finland to use their native languages in digital environments. Some of the long-term impacts may take years to become apparent, as service providers begin to adopt the updated terminology. The project lays the groundwork for such development, as it is aimed at widely used national infrastructures. The work promotes the position of the Sámi languages in an era of digital knowledge and machine learning. The impact of the project is permanent, as it will generate practices for continuous support as part of the National Library’s services.

The project will be carried out between 1 April 2022 and 31 March 2024 with a Major cultural projects grant awarded by the Alfred Kordelin Foundation.

The project is supported by a partner network, with a chair appointed by the Sámi Parliament. Partners include the AvoinGLAM network, the Giellagas Institute (University of Oulu), the Giellatekno research group (UiT The Arctic University of Norway), the Sámi Parliament, the Sámi Museum Siida and the Finnish Sámi Special Library. The localisation efforts for Kotoistus are carried out in cooperation with the Unicode Consortium. Sámi Giellagáldu, an expert body in the use and standardisation of Sámi languages, plays a key role in the project. The project participates in the Mii ovttas - Mij oovtast - Mij õõutâst - Me yhdessä (‘Us together’) network coordinated by the Sámi Parliament, in which organisations developing services in the Sámi languages cooperate. The National Library of Finland is participating in UNESCO’s Decade of Indigenous Languages through this project.
Project funder 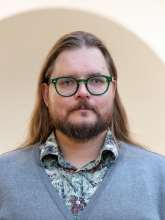 The project owner is Kristiina Hormia-Poutanen and the project manager is Niko Partanen. Other members of the project team are Nina Hyvönen, Mikko Lappalainen, Riitta Koikkalainen, Erkki Tolonen and Päivi Pihlaja.