Interest in Finnish cultural data – Finna.fi visited more than ever in 2018 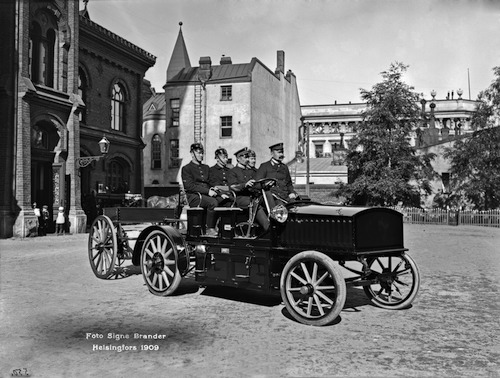 Finna.fi offers viewpoints also to the past. In the picture, there is an electric car in front of the Erottaja fire station in 1909. At that time, electric cars sold even better than combustion engine cars. Signe Brander/Helsinki City Museum/Finna.fi. Image licence: CC BY 4.0

Finns browse cultural material online more than ever. In 2018, the nationwide Finna.fi service was visited 2.3 million times, which is 19 percent more than in 2017. Images were clearly the most popular content type.

Finna.fi provides free access to the digital material, collection catalogues and photographs of nearly 350 Finnish archives, libraries and museums. It has become increasingly popular year by year. For instance, when compared to 2016, the number of visits has increased by more than 98 percent.

– ”Finna.fi is a unique online service in Finland, because it gathers collections of archives, libraries and museums into one search engine. By accessing digital cultural material, anybody is able to take a look at the old days and national treasures”, says Erkki Tolonen, head of development at the National Library of Finland.

Images and books interest the most

Images were by far the most popular content type in Finna. They were accessed more than 3.6 million times.

Some of the most popular images were the rare colour photographs of Vyborg in years gone by published by the museums of Lappeenranta. They were accessed more than 180,000 times. Images were a popular search also in the Finna Street service. With the help of the service, it is possible to find historical photos taken at the location where the person initiating the search is.

The second most popular content was books. Their information was browsed more than 800,000 times. It is possible to obtain information on most of the books in Finnish libraries via Finna. There is information available on the collections of more than 250 local libraries, as well as all the university libraries.

In addition to images and books, people mostly searched for articles, archival material and theses.

According to a customer survey carried out at the beginning of the year, 90 percent of the respondents welcome the Finna.fi service. Of all the respondents, 58 percent would recommend the search service actively.

People have clearly become more pleased with the service in recent years because a lot has been invested in making Finna easier to use.

– ”One reason for the popularity of the service is that people save time when they can access collections via one intuitive service. Finna’s collections come from reliable sources, and it is possible to get information about their access rights. It can provide a lot of added value when material is used in education, for instance”, says Tolonen.

The providers of the ten most popular entries in Finna.fi in 2018:

Key figures about the Finna.fi service:

Digital cultural heritage increases at a record rate – as many as 15 million entries in the Finna.fi service