The Finnish Biodiversity Information Facility (FinBIF) administers a national checklist of species encountered in Finland. The list has now also been published as linked open data on Finto.fi administered by the National Library of Finland’s Finto service. 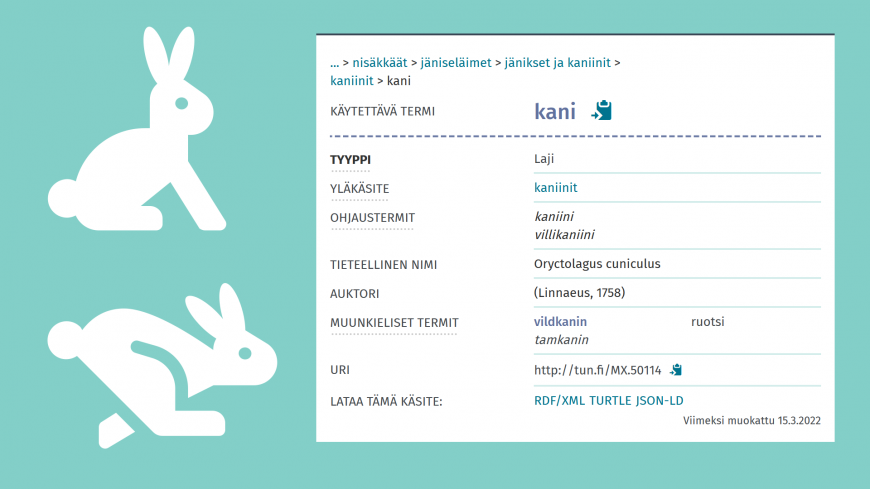 LAJISTO (finto.fi/lajisto/en/) brings species data extensively to Finto.fi users. This opens up new opportunities for expanding the cataloging use of species data. In addition, developing the links between Lajisto and the national ontology network based on the YSO General Finnish Ontology will become topical with the publication.

“Lajisto is a great initiative in expanding the utilisation of official species data with the help of Finto’s services. The key national species data repository will hopefully find new users via Finto.fi, and its opportunities in, for example, subject cataloging will be identified even better than before,” says Mikko Lappalainen, Development Manager of the Finto service.

“Publishing the Finnish Biodiversity Information Facility’s species checklist on Finto is a great first step, and even assessing its potential is impossible just yet. The use of ontologies is likely to increase exponentially in the coming year as understanding of linked open data (LOD) grows. Finto is also an excellent reference where you can direct all partners that are interested in the subject matter,” says Kari Lahti, Unit Director of Biodiversity Informatics at the Finnish Museum of Natural History.

The list has a hierarchical structure and depicts the current view of genealogical relationships between different species. The list has been compiled by and is administered by Finnish experts in different species groups. Once a year, a citable checklist is created by publishing a static version, which does not change after the publication. It can downloaded from the Finnish Biodiversity Information Facility’s website (https://laji.fi/en/theme/checklist). Finto’s LAJISTO is updated once a year in connection with the publication of the Finnish Biodiversity Information Facility’s checklist of Finnish species.

Finto’s LAJISTO list is based on the 2021 version of the checklist that was published in January 2022. In addition to species, the list includes the higher taxonomic ranks of genus, subfamily, family, suborder, order, class, phylum, kingdom and domain. The list includes scientific names as well as Finnish and Swedish names for the taxons that have one.