Exhibition: The russian roots of research into ecclesiastical art

The National Library’s Slavonic Library (Slavica) specialises in research resources and literature from Russia and Eastern Europe. The legal deposit collection of printed material from the Russian Empire between 1828 and 1917 offers a multitude of different opportunities for studying art and art history. This exhibition highlights works which are interesting from an art history perspective, but are relatively unknown to the public. 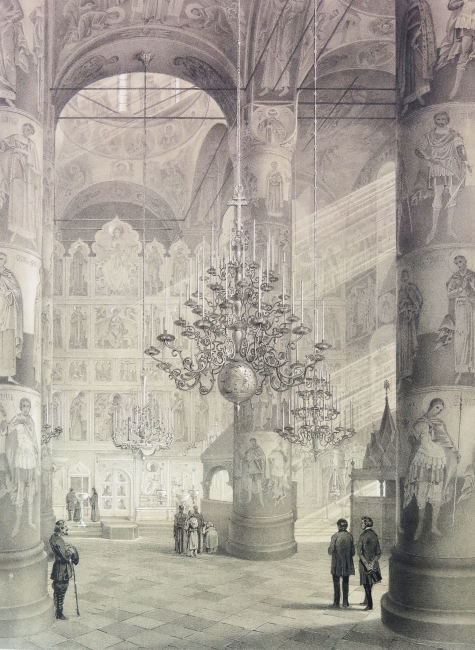 How did the collection and research of church architecture and icons get started in Russia? How has the religious cultural heritage been documented, and what kinds of museums have been established? These are some of the questions the exhibition seeks to answer. It presents the intellectual history of the study of Orthodox ecclesiastical art based on research literature published in the Russian Empire as well as central examples from the Slavonic Library’s collections of rare books and images.  The exhibition also highlights a topic which is less known in Finland – that of art history and antiquarian research, which became popular in Imperial Russia in the 19th century as part of the pan-European interest in national cultures and art. The phenomenon inspired the arts and academic research in new ways. Pan-European trends such as German idealism, romanticism and nationalism inspired artists and researchers in the Russian Empire to go to the past, to the common people and to the ecclesiastical cultural heritage for material. The phenomenon is also important for the study of ecclesiastical art, as it resulted in the creation of a new discipline, church archaeology, which focused on the Christian art of Western Europe in addition to the archaeology and art history of the Middle East, the Byzantine Empire and Russia.

The roots of church archaeology lie in the art historical and archaeological research of the late 19th century, which for its time was multidisciplinary and international. Academic research was conducted in many scientific societies in addition to universities. In addition, the church comprehensively surveyed monasteries, church buildings and their items. This research resulted in exhibitions and new museums. The extensive publications of the scientific societies and museums built an image of Western and Eastern ecclesiastical art. Another focus of the academic work was the development of new restauration methods. For example, the artistic and historical value of icons was becoming clearly understood in addition to their religious and sacred significance.

The exhibition will also look at the cultural heritage work done under the auspices of the Russian Orthodox Church in the Russian Grand Duchy of Finland, which is to say research and the establishment of museums. That work is less known than the work of government officials to protect national antiquities. Resources which belonged to people involved in this research were unearthed during the compilation of the exhibition. These newly discovered resources will expand the perspective of the roots of Orthodox church museum efforts in Finland.

This exhibition has received support from the foundation of the Orthodox diocese of Helsinki (Helsingin Metropoliittakunnan Säätiö), and the Brothers Ivan, Andrei and Vladimir Kudrjavzew fund of the Russian Charity Association in Finland.