Sähköpaimen - Dark stories and strange instruments at the National Library 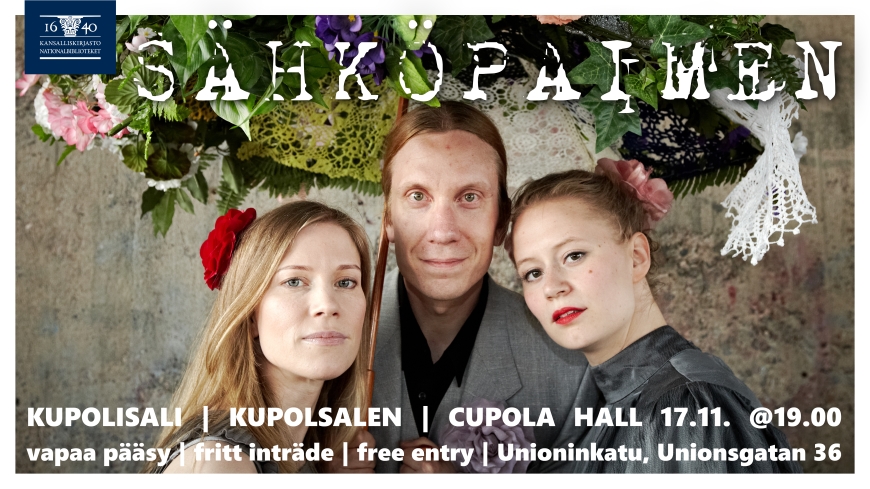 Add to calendar
Disabled access to the National library. (opens a new tab)

The Sähköpaimen trio performs archaic machine music combining Finnish, Karelian and Ingerian traditional music with live-looping and effects, machine beats and soundscapes. On the band's Hämärä album, to be released in spring 2023, a new twist will be served through a mélange of a modular synthesizer and risk-taking live improvisation. The new single of the band will be released in the Cupola Hall of the National Library on the 17th of November.

‘Hämärä’ (translation: dusk/twilight/dark/dim/strange) is a shadowy, strange, and obscure moment between light and shadow, new and old. It is an apt description of Sähköpaimen's modern folk music, which combines extremes and welds opposites together: the oldest traditions meet modern technology, organic merges with electricity, improvisation collides with rhythm. ‘Hämärä’ is momentary and transformative, as is the improvisation taking place in the band's performances – a magical moment of transition and danger where anything can happen.

Twilight moments have been important for the transition of folklore - the moments spent together passing on stories and beliefs from one generation to the next. Sähköpaimen also draws on another meaning of Hämärä: strange folk tales and strange music from the borderlands of twilight. These themes have entered the repertoire from Finno-Ugric regions, our Nordic neighbors and the Italian Alps.

The Hämärä record includes the village choir Li Magnoutou, whose members speak Franco-Provençal, an Italian minority language. Their Piedmontese spells, cattle calls and traditional songs merged together with the music of Sähköpaimen bridge together the different corners of Europe. Master folk singer Hilja Grönfors also makes a guest appearance on the album.

Old-fashioned wind instruments such as shepherd's pipes, wooden horn and liru bring their own color to the band's sound. The music played by shepherds used to be familiar and casual to everyone, it belonged to the everyday soundscape of villages and nearby forests from spring to autumn. With the disappearance of shepherd culture, shepherd music has also become rare, even though the sounds of their unique instruments are still interesting and expressive.

The beats and loops of Sähköpaimen are somehow familiar, but still strange. They play with the idea of ​​what electronic music would sound like, if it was not based on popular music, but on the Karelian kantele and jouhikko tradition (a type of bowed harp). What if a laptop and a sequencer had been used in evening parties in the Suistamo regionin 1864?

The relatively fresh tradition of the modular synthesizer is continued in the spirit of classic minimalism and techno, but the melodies come from the shepherd tradition. Turning the knobs takes you from clean tones to noise and back. Everything happens here and now, and the machine provides its own impulses. The machine is a whole being and not just a collection of concurrent sounds.

The concert is supported by Arts Promotion Centre Finland