The main building of the National Library of Finland 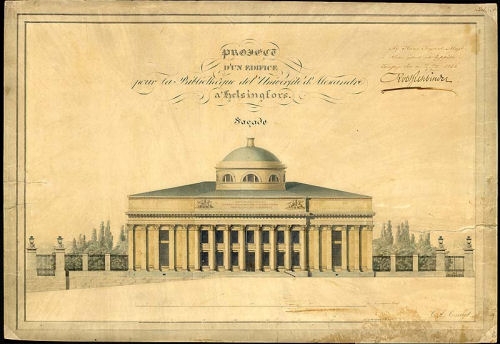 The main building of the National Library of Finland is one of the most renowned landmarks of the early-19th century Empire architecture and is also significant among the public libraries of its time at a European level. The point of departure of the design is fire safety: a construction site away from the university’s main building, surrounded by planted trees, as well as halls and rooms covered with arches.

In the architecture of the façade and the magnificent interiors, C.L. Engel combined, in an original way, motifs from Classicism and references to the ancient world. The Emperor Nicholas I of Russia approved the most monumental of the three alternatives drawn up by Engel. The symmetrical placement and the layout of the library halls can be derived from the bathhouses of the Roman Emperor Diocletian.

The large halls of the library are all interconnected. The entrance leads directly to the core of the building, the Cupola Hall, and continues to Rotunda annex. The numerous reading rooms, South Hall and North Hall are connected to the Cupola Hall. At first, all halls had only rows of columns circling the walls and behind the galleries supported by them, the bookshelves were organised by discipline. Hall columns are coated with stucco marble. The decorative paintings of the arches were completed in 1881.

Taken as a whole, the three grand halls of the National Library of Finland are one of the finest entities in Finnish architecture.  The entrance of the library is opposite the Cathedral of St. Nicholas, currently known as the Helsinki Cathedral, built at the same time. Consequently, the library is an inherent part of the entire Senate Square area and the political message of the architecture, which emphasised the state connection with Russia.

In the 19th century, artworks and plaster cast copies of Classical statues.  In 1904, Magnus Enckell’s large-scale Symbolist painting “The Golden Age” was placed on the upper gable of the North Hall.

Image: The main building of the National Library of Finland was designed by the architect C.L. Engel in 1836 and it was completed between 1840 and 1845. 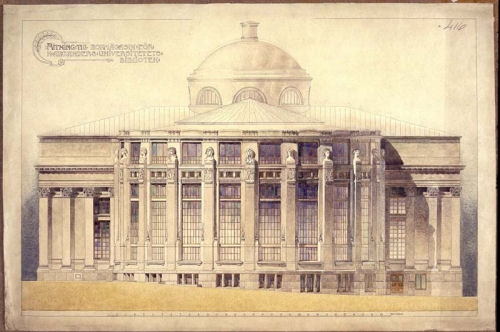 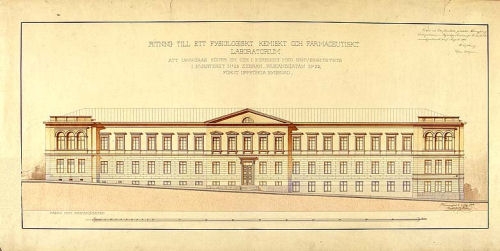 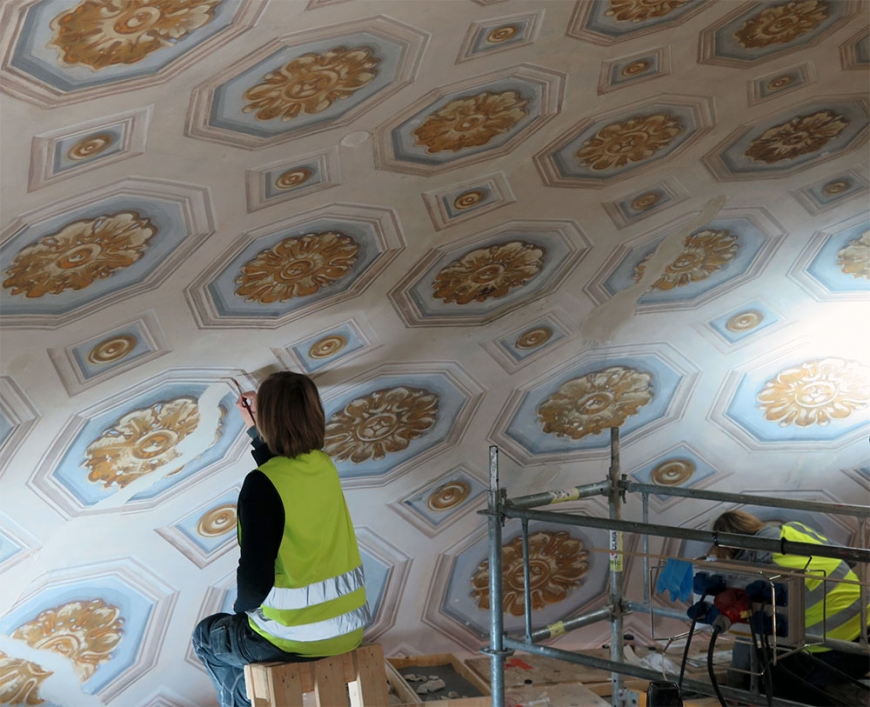 As background information and a tool for restoration solutions in the National Library of Finland building, a building-historical survey was commissioned from Okulus Architects Oy.
The aim of the survey was to present the historical change periods in the building to better understand its current state and to find out the age of the later construction parts.  The library interiors are one of the most impressive and exceptionally authentically preserved examples of Engel’s architecture. The Finnish survey (published 22 Sep. 2011) can be read at Doria.fi: http://urn.fi/URN:NBN:fi-fe2016110226201

In the renovation, the functionality and disabled access of the library was improved and building services engineering was renewed. The alteration work promoted the preservation of the building and its use as a library. The library building is protected by the city plan and the Act on the Protection of Buildings. The National Board of Antiquities actively partook in the project, at both at design and implementation stages.