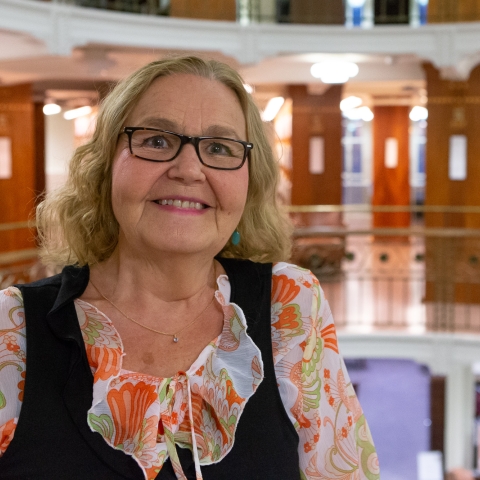 The Professor Pirjo Kukkonen fund was established in her name as a part of the fund of cultural heritage at The National Library of Finland. The purpose of the fund is to preserve, collect and increase world wide cultural heritage focused on the important role of translation as a means of transferring knowledge and cultural heritage by translation traffic, that is, importing and exporting translations, between various languages, nations, and cultures. This will be realised as a digital project, The Library of Translations – Översättningsbiblioteket – Käännösten kirjasto, as a part of the digital library at The National Library of Finland and its Cultural Heritage Fund. The pilot project of translations promotes open access while presenting resources in digitised form; originals and translations as parallel texts will increase their visibility, availability and usability of the collections of translations through the digi.kansalliskirjasto.fi interface.

Pirjo Kukkonen is the first professor of Swedish translation studies at the University of Helsinki. She is a scholar in the fields of language, literature, and culture, a semiotician and translation researcher at the Department of Finnish, Finno-Ugrian and Scandinavian Studies, at the Faculty of Arts. She is conducting research of translation in our national languages Finnish and Swedish, and Scandinavian languages. As a semiotician she works in the realm of signs and sign systems with the interplay of signs and meaning, studying how meaning is created and how different worlds are translated.

A leading thought in her research is the idea of humanism and cultivating humanity, how knowledge is shaped and how it is transferred as cultural heritage. Therefore, her fund is a means to save, promote and increase cultural heritage as a part of The National Library of Finland. To her the library is an important place of learning and scientific research, a genius loci, since her early years of study. The aim of the digitised Library of Translations is to present a comprehensive picture of how originals, translations and their versions are collected under one title, offering visibility, increasing availability, and usability. The Library of Translations manifests the importance of translation in our cultural, language, literary and translation history.